In our modern day efforts to “eat healthy”, carbs have become the bad guy on many people’s dinner menus. While I definitely wouldn’t even go carb free personally (I’m a Frenchman so bread is in my blood!), I do feel some benefit to taking a break from it in my evening meal. This is relatively easy to do in summer, when the heat naturally has me reaching for fresh, light flavours, but come winter and the craving for richer comfort food must be satisfied.

This is where this ripper of a dish swoops in to save the day!

When most people think duck, their mind instantly goes to the peking variety, but the bird is also very popular in France and served just as one would serve chicken breast. Duck has a deeper and richer taste though, making it ideally suited to the colder months.

And, as I showed in my Two Ways With Cabbage post last winter, cabbage needn’t be relegated to coleslaw territory all year ‘round, as it’s delicious when cooked, adding an element of sweetness which complements almost any meat dish.

Shortbread started off with very humble beginnings – as the slow cooked off cuts of bread dough. Eventually, butter took the place of yeast to more closely resemble the shortbread we know and love today. With its buttery richness it’s not hard to imagine that shortbread was once considered a luxury and could only be afforded for special occasions such as weddings, Christmas or New Year’s Eve. A particular variety known as “petticoat tails”, flavoured with caraway seeds was apparently a favourite of Queen Victoria.

For this iteration of the Scottish favourite, I used classic gingerbread cookie cutter shapes, which would be perfect to use if you’re cooking with the kids! For a more grown up version, you could create the classic shortbread fingers or the wheel shape sliced into triangles (i.e, the petticoat tails).

I often feel that much of the magic and romanticism surrounding French food lies in the mysterious origins of so many dishes. Factual histories become Chinese whispers, embellished and morphed along the way until each version has as many likelihoods and doubts as the next.

Madeleines are a perfect example of this, where the only thing we can be sure of is that they are truly scrumptious (and it’s probably also safe to say they were named after someone named Madeleine).

It’s accepted that these little cakes hail from the French town of Commercy, in the North of the Lorraine Region of France, and is now considered a speciality of the area. Beyond this, there is lots of conjecture on what the true origin of the Madeleine is.

One version claims that they were a family recipe, made by a cook named Madeleine, for her noble employer, Slanislaw L. Slanislaw’s daughter (and wife of Louis XV), Maria, shared them with the King who adored them and decided to name them after their maker. I like this version, but this doesn’t explain the unusual seashell shape, which is what makes this dessert so recognisable.

Another version, which is less romantic but explains the shape, poses that they were again made by and named after a cook called Madeleine, but this Madeleine was making them for pilgrims tracing the path through France to the final resting place of Saint-Jacques (St. James, the patron saint of Spain) whose symbol was the seashell.

While you’re mulling over your own thoughts on the matter, why not grab a coffee or tea and might I suggest adding the perfect petit-four to match – a Madeleine!

Serve the Madeleine warm for an afternoon tea or for an after dinner treat with a glass of Chateau Viranel “Gourmandise” available from www.airoldifinewines.com.au .

I love croissants. I ate them for breakfast every morning when I was growing up in France. My Mum would wake up before everyone else and pop them into the oven so that the rich smell of butter and pastry would fill our noses as we woke up and dressed for school. We ate them hot, crispy and with a cup of black coffee (once we were old enough).

Now in Melbourne, it’s amazing how many places sell croissants but how far they all are from tasting like the ones I ate as a boy. For the most part, I find them too sweet, too dense and too soft. 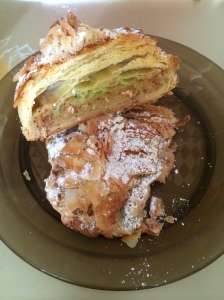 You can imagine my skepticism then when Mrs. Fermier started raving to me about this little hole-in-the-wall croissant shop in the seaside Melbourne suburb of Elwood. She’d waited 1 hour in line and bought the last too croissants (they sell out every single day they are open).

As it turns out the master behind these edible little crescents is an Aussie-born but French-trained pattisière, named Kate. I had the pleasure of chatting to her one morning, and I learned that she even imports some ingredients from France to get the taste and texture of her vienoisseries just right. It’s no surprise that with such a dedication to quality ingredients and a clearly wonderful talent, every piece from Lune Croissanterie tastes like the real deal.

It’s not just the basics that Lune nails. There’s a wide repertoire available including pain au chocolat, ham & gruyere croissants, specialties like Kouign-Amann (a Breton pastry pronounced “Ku-in A-mun”),“cruffins” (a mélange of muffin and croissant), and la pièce de la résistance, the “twice-baked”. Traditionally in France, left over croissants from the day before are filled with all manner of delicious things and then baked again. The Lune versions are only available on the weekend, sell out in a flash and come in ever-changing, mouth-watering varieties like Almond, Turkish delight and banana split!

If you’re thinking about indulging in one of these baked pieces of heaven (as well you should be!), don’t even think about sleeping in and wandering down at about 10am on a Saturday. You’ll need to be waiting in line from at least 6:30am if you want your pick of the menu, but thankfully the amazing Lune team is busily making coffees for patient customers so there’s something to keep you going until they open.

Lune Croissanterie is located at 29 Scott St, Elwood and is opened Fridays from 7:30am, and Saturdays and Sundays from 8am, until sold out. http://lunecroissanterie.com

Over the coming weeks I’m going to share with you the many facets of my biggest food obsession – cheese. Few things, culinary or otherwise, are more ubiquitous with the hexagon nation than fromage. You’d be surprised at how many varieties and subtleties of flavour exist and so I just couldn’t fit everything into one post. For today, I’ve started at the end, showing you a platter of a few of my favourites (at least from the selection we are able to purchase in Australia, but that’s another story.)

Now, it’s not just the cheese that matters on a cheese platter. What you eat your cheese with is equally important. A good quality crusty loaf of bread is a must and a touch of sweetness like a fig or quince paste can really enhance the flavour. I’ve combined the two in this delicious fig and walnut bread recipe that you can easily make at home and impress your guests with. 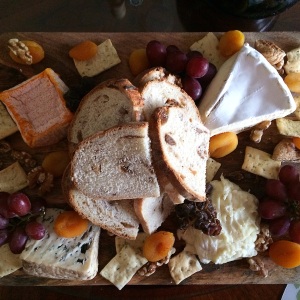 I paired this wonderful bread with a cheese platter in which I used the following cheeses:

All those are available from feast in Hampton or Richmond café and Larder cheeses, you can also visit their website: www.rhcl.com.au

With this amazing cheese platter I recommend a Chateau “ Ollieux Romanis” Corbiere red available from www.airoldifinewines.com.au .

Steak tartare is a dish of culinary legend as it was originally thought to have come about from the tenderised pieces of meat that Tartar horsemen would carry under their saddles. In actual fact this was to help heal their horses saddle sores and definitely not to consume (ew!). More accurately, the dish evolved from raw and cooked minced meats brought to Europe by eastern Europeans. At the end of the 19th century anything served with tartare sauce was known as “à la tartare” and somehow this really stuck with steak. The dish served most popularly as we know today with a raw egg on top, became fashionable in the 1950’s and is now a staple at most French cafés and bistros.

Some say this dish isn’t for the faint hearted, but I disagree! If you can put aside your judgments on raw meat and let your taste buds guide you, most people would be surprised at how tasty steak tartare actually is! 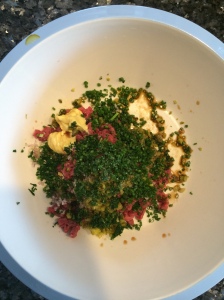 With the steak Tartare I recommend a Chateau Mouthes Le Bihan “Vieillefont” available from www.airoldifinewines.com.au