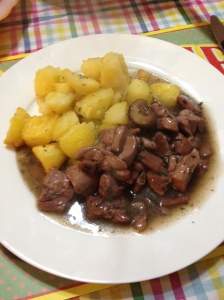 “Sauce chasseur” also known as “hunter sauce” is a brown sauce used in French cooking traditionally to cook game meat such as venison, rabbit, wild fowl and other meats. It often contains mushroom and shallots. Traditionally, while returning from the hunt, the hunters would pick the mushrooms that they would then use to prepare the sauce. In this recipe i used port instead of brandy as i find that it give the sauce more body. Chasseur is thought to have been invented by Philippe de Mornay, who is also credited with inventing Mornay sauce, bechamel, sauce Lyonnaise, and sauce Porto.

Method: Heat up your pot on medium heat with a drizzle of olive • Slice the shallots, crushed the garlic and chop the thyme • Add the shallots, thyme and garlic to the pot and cook on medium heat for a few minutes or until the shallots starts to brown a little • Dice the bacon and add them to the pot • Roughly cut the chicken thighs and add them to the casserole. Cook the chicken until golden brown • Add the port and reduce by about half, then add the red wine and again reduce by about half • Finally add the vegetable stock and cook on high heat until it starts boiling then turn the heat down to medium and cook for 30 minutes • Mix a little bit of corn flour with some water and add to the sauce to thicken it • Season to taste. 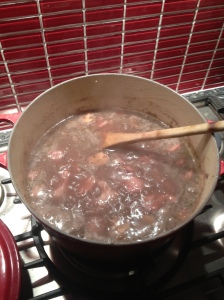 For the roasted potatoes:

Method: Peel the potato • Put them in a pot and submerge them with cold water, cook them until just tender • Drain them and shake them well to get rough edges • Spread them on a roasting tray, drizzle with olive oil and roast in a hot oven (220 degrees celcius) until crispy • Take them out of the oven and sprinkle with chopped rosemary and salt.