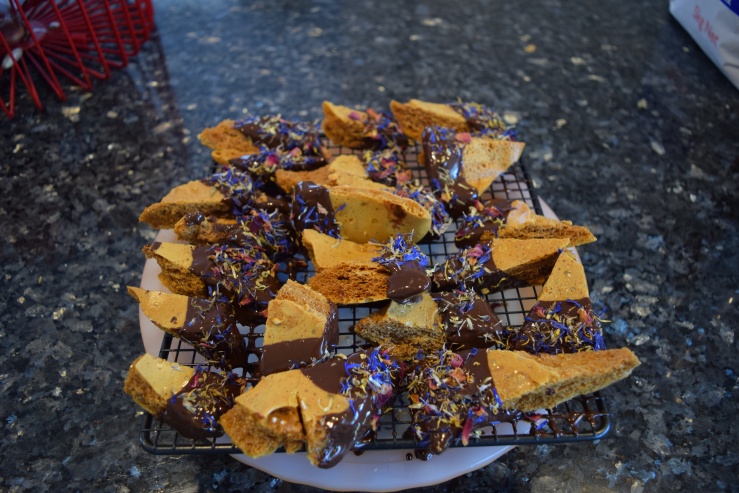 Honeycomb is a fun and simple Amuse-Bouche that is full of flavour, light and delicious . It is also a great addition to many dessert recipes like waffles, ice cream or sprinkled on top of a berry crumble. Perfect little treat to go with your coffee and tea at the end of you meal or you can also package them to give them as presents to your friend or family!!!

There is something special about working with old recipes from hundreds of years ago, it almost feels like going back in time. At least that is how I felt when I was cooking this delicious recipe for the “Mistembec”. This is a recipe that dates back to the XIV century, though it has slightly changed with the addition of the baking powder or yeast for example! Some say that the name itself mis-em-bec means put-in-mouth some say it may come from Arabic. They are a kind of doughnut or “Beignets”, like we call them in France, fried in oil and coated in honey, sugar syrup or caramel.

I paired my “Mistembec” with a drunken cherry jam. The cherry jam really complements this delicious dessert as the acidity of the cherries and rum aroma combined, give the “Mistembec” another dimension.

Ingredients for the caramel:

Ingredients for the Drunken cherry jam:

Serve with a Chateau “Suduiraut” Sauterne from http://www.airoldifinewines.com.au

The Crème Caramel is, I think, one of the most iconic French dessert, one that you’ll find on every brasserie menu around France or French restaurants overseas. It is a dessert I used to have growing up; even the school cantine used to serve crème caramel. I like to refer to this dessert as the Tarte Tatin version of the Crème Brulée because it has the caramel at the bottom while cooking.  I decided to revisit this classic recipe and give it my own personal twist by adding some saffron and orange blossom aroma. The floral aroma and the richness of the saffron combined with the refreshing scent of the orange blossom goes perfectly with the sweetness of the caramel. It also adds a touch of spring to this classic French dessert!

Ingredients for the Caramel

Back to Basics: Choux Pastry

As we know them today, Choux pastry was created by a pâtissier named Avice in the 18th century. They were named as such because they looked like little cabbages and the French word for cabbage is “choux”. The original recipe though is thought to have been created in the mid-sixteenth century by an Italian chef in the service of Catherine de Medici.

Choux pastry is one of the quintessential French recipes. The pastry itself is quite easy to make but it’s what you do with it that contains the ‘WOW’ factor. The show-stopping French wedding cake, the Croquembouche, is a tower made of choux pastries, covered with caramel and spun sugar. Profiteroles, éclairs and churros all use the same basic choux recipe and as well as gougères, which are a savoury option, filled with cheese.

For something simpler, why not try filling them with my delicious orange and vanilla crème pâtissière and coating them in a crunchy caramel topping. They will make the perfect dessert to share with friends or family after a delicious meal or to entertain guests at an afternoon tea party! 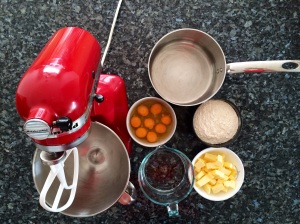 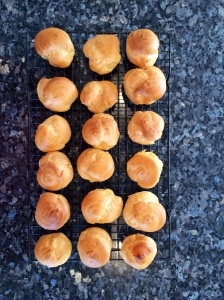 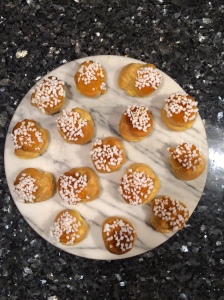 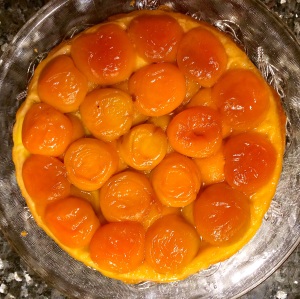 The story of the Tarte Tartin gives hope to everyone who is absent-minded in the kitchen. This “accidental” dessert is credited to the sisters Tartin who ran a hotel in the town of Lamotte-Beuvron, in France’s Loire Valley. One of the sisters, Stephanie, was known as an excellent cook but also a bit of a scatterbrain. As the most popular version of the story goes, one day she left the apples for her apple pie in the pan for too long and so they over-caramelised.

Not wanting to waste the apples, but wanting to hide the mishap, she covered them with tart pastry and placed the whole pan in the oven to bake. Once cooked, she flipped her concoction back over to serve in order to make it look like a normal tart.

If only every kitchen disaster could be such a hit with guests!

The great thing about this recipe is that it works just as well with any fruit that caramelises nicely. I was lucky enough this summer to have a bumper crop of apricots on my tree and they worked beautifully for this Tarte Tartin. Peaches also work a treat and for the savoury lover, some juicy cherry tomatoes rival their sweeter cousins.

Crème brûlée…just saying the words out loud is enough to glaze over the eyes of most dessert lovers as they start to daydream about the <crack> of the toffee crust as it’s tapped with their spoon, or how the velvety vanilla cream almost dissolves as it hits their tongue, and the surprising <crunch> every now and again as their teeth find a shard of toffee.

Having grown up and studied cooking in France, this quintessential dessert has always been a big part of my life – both the cooking of and eating of it (eating it is definitely my favourite of the two).

Though the origins of this dish may not in fact be French at all (there are strong claims from both the English and the Catalans and its inventors), it’s safe to say the crème brûlée as it exists today is almost so synonymous with French dessert, it could be considered cliché.

I really enjoy making this dish for family and friends as there is an anticipation that builds up when guests know it’s on the menu, a kind of gastronomic foreplay if you will that makes the air feel electric. Thankfully, this little ramekin of decadence always satisfies, while still managing to leave the diner longing for just one more spoonful…

Method : In a medium saucepan bring the cream and vanilla bean to the boil. In the meantime, in a mixing bowl whisk together the egg yolks, sugar, vanilla seeds and the orange zest until the mixture become slightly white. Once the cream has boiled pour it over the egg mixture while whisking. Mix well for about a minute to make sure everything is dissolve. Pour the mix back into the saucepan and cook over a medium to low heat while stirring the mixture with a wooden spoon, occasionally whisking as well. Cook until you see a swirl of fat at the top, or, using a digital thermometer, until the mixture reaches 85 degrees Celsius. Then, pour the crème brûlée mix into a clean bowl and whisk for 2-3 minutes to cool it down. Put a couple of orange segments at the bottom of some ramequins and pour the mix over the top and leave to rest overnight. Just before serving, sprinkle a thin layer of caster sugar over the top of the crème brûlée and caramelise it using a cooking blow torch. A glass of chilled sweet white wine would compliment this wonderful dessert perfectly.