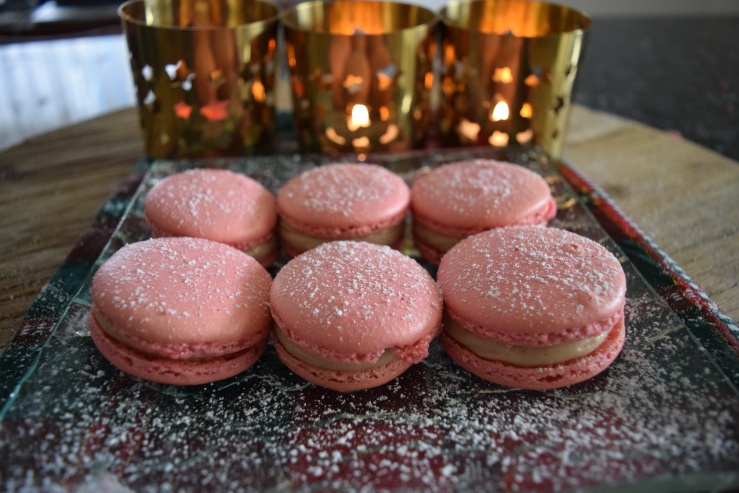 The Macaron appeared in Europe in the middle ages, made from sugar, almond and egg white from the very beginning. Some say that the Macaron was born in the VIIIe century in venetians monastery. They were introduced in France by Catherine de medicis for her wedding with the Duc d’Orléans. The macaron use to be eaten as individual biscuits and it’s not until 1830 that, in Paris, pastry chefs decide to stick two macaron together using ganache to create the “parisian” macaron which was later popularized by the very famous Ladurée.

They are now many different flavours of macaron like a mandarine and olive oil from Pierre hermé in Paris or lime and basil and even peach and rose! I have decided to add a festive touch to my macaron today by using Christmas spices to flavour my crème.

Macaron with a Christmas Spice Cream

Ingredients for the shells: 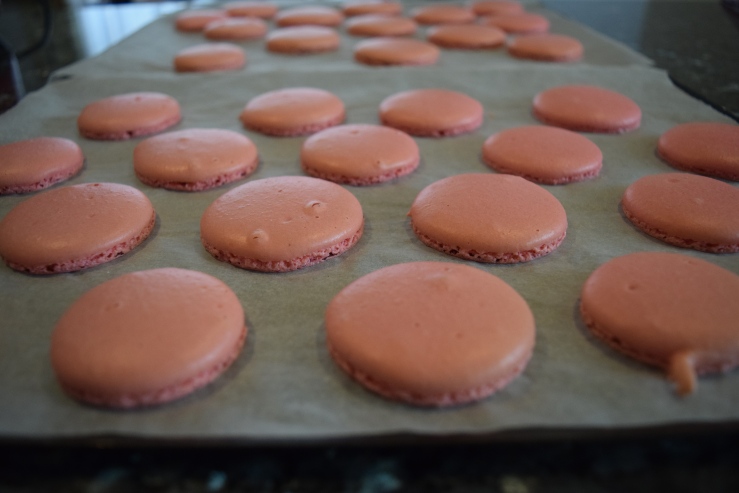 Ingredients for the Crème: 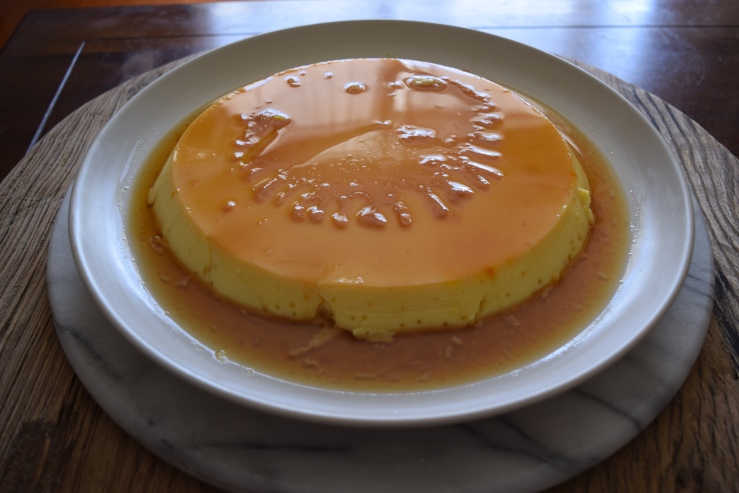 The Crème Caramel is, I think, one of the most iconic French dessert, one that you’ll find on every brasserie menu around France or French restaurants overseas. It is a dessert I used to have growing up; even the school cantine used to serve crème caramel. I like to refer to this dessert as the Tarte Tatin version of the Crème Brulée because it has the caramel at the bottom while cooking.  I decided to revisit this classic recipe and give it my own personal twist by adding some saffron and orange blossom aroma. The floral aroma and the richness of the saffron combined with the refreshing scent of the orange blossom goes perfectly with the sweetness of the caramel. It also adds a touch of spring to this classic French dessert!

Ingredients for the Caramel 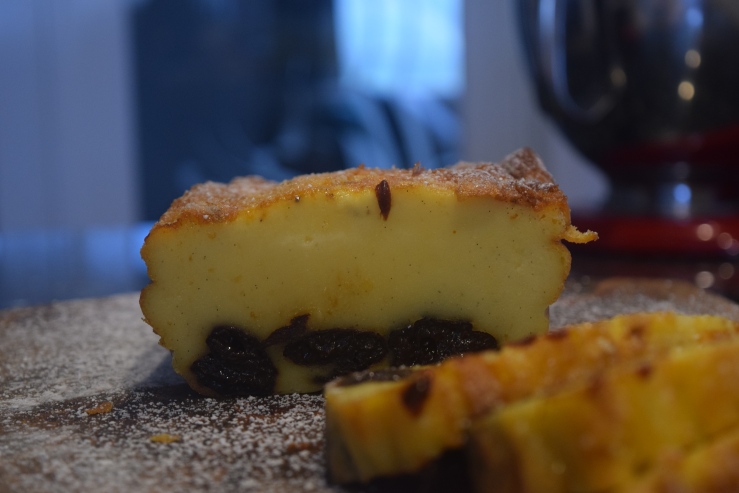 Brittany is a region set in the north west of France and like most other areas of the country has distinct culinary specialties for which it’s famous both nationally and globally.

Most famous of all Breton dishes I would say is the galette. A savoury kind of crêpe made from buckwheat and filled with delicious but simple ingredients. In the dessert sphere, there is the kouign amann, which is pastry sheets laminated in butter and sugar that caramelize as they cook. (The best version I’ve tasted outside of France can be found at the amazing Lune Croissanterie in Melbourne).

The third famous dish, and the one that I’m showing you today sits somewhere between the two above as it is a dessert, but far less sweet than the kouign amann. It’s the Far Breton.

Far Breton is a custard flan with tasty prunes (which have been soaked in rum or Armagnac) hiding at the bottom that is baked to form a gold or almost black shell on top. This recipe started life in the 18th century and was originally eaten completely savoury as a side to meat.

It’s super simple to make but one tip I would give to achieve the most authentic result is to use the freshest (preferably organic) milk you can find, and, despite promoting using local produce most of the time, butter imported from Brittany or Normandy. The Brittany (and Normandy) regions make some of the best butter in the world and while we have high quality dairy in Australia, the taste just isn’t quite the same. 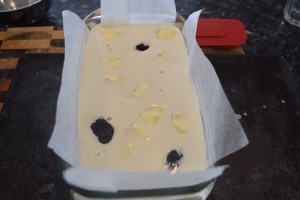 Leave to cool in the tin at room temperature and enjoy with a cup of coffee or tea! Or the way I like it, is with a glass of Calvados!

Watch the how to video below or visit my Youtube channel here to view more videos.

My love of cooking has a lot to do with nostalgia. I feel that when making a recipe from my childhood or one that is linked to a place or a special event, I am immediately transported back to that time or that place and can relive those delicious memories once more. Gâteau Basque is one such recipe for me as it represents the time that I spent working in the Basque country early on in my cooking career.

The recipe itself is not fancy or particularly difficult. It’s a classic sweet pastry, filled with a vanilla and rum cream, not unlike the crème patissière that you’d find in a strawberry tart.

In the Basque country this cake is enjoyed as a dessert after dinner, but in fact it would make a perfect afternoon teacake with a delicious cup of coffee or fragrant earl grey on the side.

What recipes are nostalgic to you?

Leave the Gâteau to cool down completely before serving, or keep it for the next day of you can resist – it will be even better! 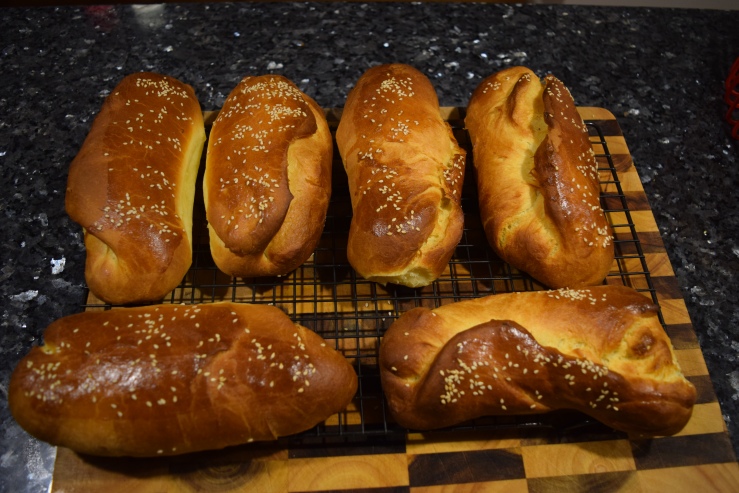 If I had to describe brioche to someone who had never tried it before, I guess I would say that it’s a hybrid between cake and bread. It often comes in loaves just like bread, but as soon as you slice it you can see the texture is lighter, and more buttery, yet not quite spongy enough to be cake. It’s because of exactly these properties that the French class Brioche as a viennoiserie, along with pastries like croissants and pains au chocolat.

The first written reference to Brioche was in the 15th century and though it’s origin isn’t confirmed, it’s generally believed to been a Norman creation (i.e. from the north of France).

Savoury brioche is often eaten at breakfast in lieu of bread in France. Sweetened varieties can be likened to Greek Easter bread, and in fact, my favourite kind of sweet brioche, called Mouna, is also served around Easter time. Mouna is traditional in Pied-Noir or Algerian cuisine, and because this is where my Mother was born, she has made it for Easter ever since I was born.

You can use brioche to substitute for bread wherever you want to add a richer flavour and fluffier texture. For example, use it as burger or hot dog buns, or slather some cheeky nutella on top of a slice at breakfast, or, use it to make French Toast like many Aussie cafés are already doing. 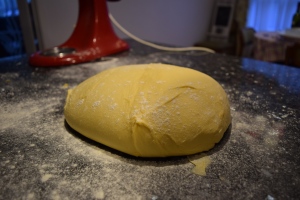 Tip: Do not let the yeast come in direct contact with the salt as it would kill it.

In the fifteenth century the Gascon-born French King, Louis IV, famously said in his coronation speech something along the lines of, “I want every peasant to have a chicken in their pot on Sundays”. Well, far be it from me to deny the wishes of an ex-sovereign, so today, I bring you this simple recipe that’s perfect for feeding the family, Sunday or otherwise.

Just like the pot-au-feu recipe I’ve shared previously, you can use the broth from the pot that remains at the end of cooking as an entrée and then serve the meat and veggies for the main.

What really brings this dish to life though is the sauce gribiche. The capers and cornichons give it a tang that complements the chicken so well! 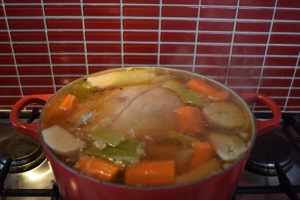 I suggest you pair this classic dish with a “Close Planted” Pinot Noir 2012 from www.airoldifinewines.com.au

Watch the how to video below or visit my Youtube channel  here for more.